Springtime never felt as sweet when I lived in the Sonoran Desert of Arizona as it does here in the Pacific Northwest. For one thing, Arizona’s winter was not bleak; it was a welcome reprieve from all the heat. Though Arizona spring flowers are pretty, and precious because they didn’t last very long, and the fruit trees blossoming always brought a charming touch to an otherwise barren landscape, nothing beats the lush foliage and riot of color here in Washington.

Admittedly, winters are much more lifeless looking, unless we are treated with a dusting of snow, so the contrast between winter and spring is sharper, but I’ve never seen so many flowers in one place nor such variety.

Flowers grow wild, and almost everyone has a garden of bulbs and flowering shrubs such as the lovely hydrangeas which make me think of a living bouquet. Flowers here take very little care becau

se the climate is so nurturing and blossoming trees line almost every street.  The flowers were even bloom if we get a late snow!

I used to think I had the worst sort of black thumb, but that was when I lived in Arizona. Now I live in what could rightly be called The Garden State, although that honor belongs elsewhere, I successfully grow flowers and even vegetables.

One unique thing about this area is the local growers of daffodils and tulips. One of the nearby towns even has a Tulip Festival which brings thousands of visitors to stroll through the expansive show gardens and fields of flowers. For acres and acres, and miles and miles, gigantic swatches of color blooms. Photos don’t do them justice but I have made the attempt.

Whenever I walk through or drive by those huge fields, I think of the poem by William Wordsworth about that Daffodils. My mother loves that poem 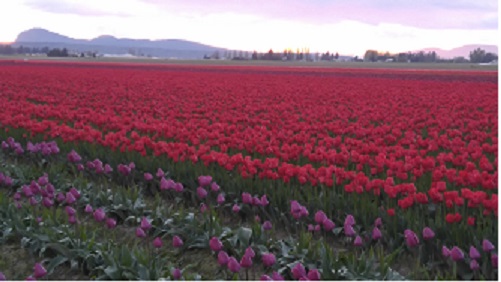 and often recited it to me when I was a child. I visited his house in England’s Lake District last summer when I was on a huge research trip all over the lovely, inspiring countryside.

Here is Wordsworth’s poem which he composed while walking through and gazing upon his own garden filled with daffodils: 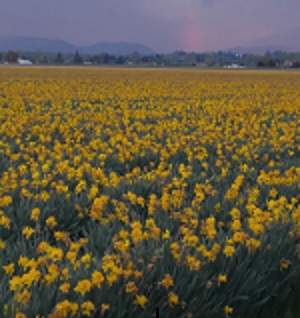 I Wandered Lonely as a Cloud

2 thoughts on “The Beauty of Springtime”