I’ve been lucky enough to get to England reasonably frequently. Ireland as well, as it happens. My secret is a simple one: I married an Englishman who wants to go home as often as we can manage it. I don’t think he wants to live there—quite certainly not after Brexit!—but it’s home to both of us now, as the first years of our marriage were spent there and our first daughter was born there and the second adopted during those years.

Needless to say, we have lots of pictures taken over the years. The ones with people in them are relatively easy to identify, but the landscape shots are, shall we say, a bit more difficult. Sometimes I get it right and sometimes I get it wrong.

Now I actually posted this with the full conviction that it was a rural site in Ireland. Well, no. This summer with our Yorkshire cousins we drove past the spot and she pointed, saying, “Remember picnicking there?” Oh. Okay. So that was Yorkshire, huh? Well, it was a nice picture in a pretty spot, wherever it happened to be. 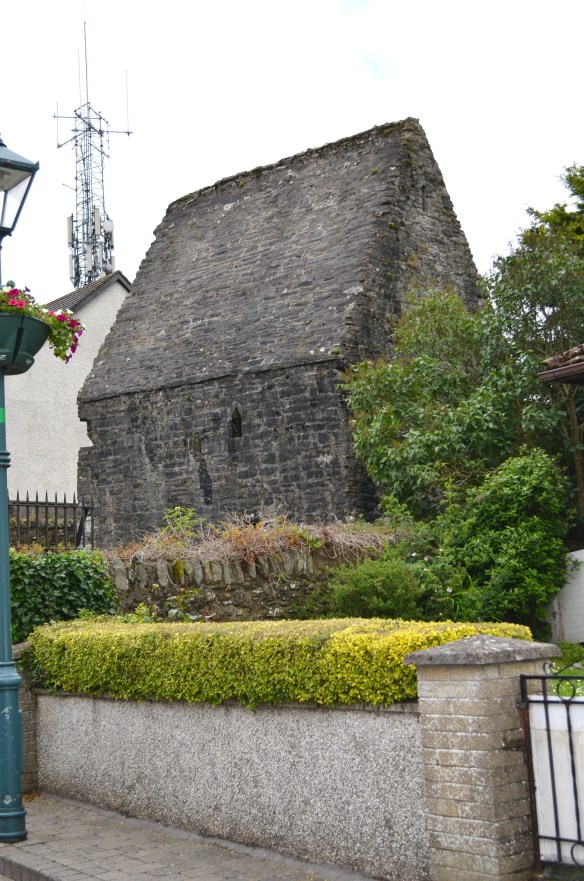 That is in Ireland. I’m sure of it. I just don’t remember where in Ireland. It wasn’t Dublin. Most likely it was somewhere in County Meath, which was the first area that the English really dominated. In fact, in early Anglo-Irish times, Meath was the central part of the Pale, where during the 15th century when Anglo/Norman government was weakened, the English authority was strongest. Which is where you get the phrase “beyond the pale,” which now generally means exceeding the limits of civilized behavior. Then it was the area where what the English considered the dangerous, barbaric Irish were rampant.

Wherever it is in Ireland, I was charmed by the contrast between the ancient stone hut built in 700 or so by one of the early saints and the communication tower rearing up behind. In later post-Henry VIII days, there was a tunnel made between this hut and the church across the way, so that Catholics could escape the concentrated attempts of the English to annihilate all traces of Popish loyalty.

Now this is one I do remember. Not only where, but when. That is our old house in Kew, just across the Green from Kew Gardens. It was built in 1850 or so, when Victorian London was expanding in all directions. Our house is the one by the car facing to the right. It was 14 feet wide, but very deep. We had two living rooms, a dining room, a big kitchen (that was a new extension: when we bought the house it had a kitchen 4 feet deep that had once been the outhouse and a sort of pantry by the side), bathroom, and three bedrooms. I loved that house. In 2015 when we were in London with our granddaughter we had some extra time and had a cab driver take us out to Kew. It took two hours. I was limping at the time (recovering from spinal surgery!) so we couldn’t take the Tube which would have been much faster.

But I loved seeing it again. The man with my husband (who has the camera) is the present owner of the house who’s lived there for 30 years. My architect husband was pleased beyond measure that he has kept all of the changes we’d made in the house: stripping the brick party wall and painting the bricks white, raising the floor level of the back living room, and keeping the circular staircase. It’s still wonderfully the same!

1 thought on “Remembering Where I’ve Been”