Today the word “subtlety” is a noun indicating nuance, artfulness, elusiveness, etc. But in the Middle Ages, a “subtlety” referred to a food sculpture enjoyed by the wealthy at medieval banquets. Banquets were not times to merely eat lavishly, they were elaborate entertainments, and the subtlety played a major part in the festivities. Desserts as we know them today did not exist. Most courses were a co-mingling of sweet and savory dishes. The subtlety helped to divide the courses for the diners, being served in between to signal the end of one course and the beginning of the next.

A subtlety could take many forms—usually something whimsical and highly colorful. Many of them were made out of marzipan, a paste made from almonds and sugar bound together with egg whites. Sugar, by the way, was an extremely expensive “spice” in the Middle Ages. So expensive that it was known as “white gold.” Most of it came from cane sugar grown in southern Europe (Spain, Sicily, Cyprus) and the Middle East. This is one reason that subtleties made with marzipan could only be afforded by the very rich of Europe.

Edible castles, complete with towers and turrets, sometimes with wine fountains, were a popular subtlety put on display at medieval tables. Other times subtleties took the form of ships, fabulous creatures, or even famous philosophers. The medieval imagination was the only limit, and if you’ve studied medieval illuminated manuscripts, you’ll know that the medieval fancy was considerable. 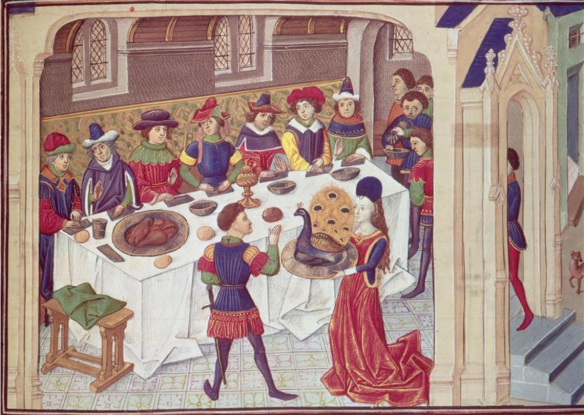 In my medieval romance, Loyalty’s Web, a subtlety appears in the following scene:

Thrice before the banqueters had “oo”-ed and “ah”-ed over the pastry-maker’s subtleties: a sea horse, all spun of painted sugar; a ship of marzipan; a pastry dragon that spouted real flames. But even Heléne, who had grown up in wide-eyed admiration of his art, had never seen anything like the magnificent soaring castle now being borne into the hall by six of her father’s squires. Sculptured from pastry and sugar, it stood well over three feet high, surrounded by miniature animals of prey—deer, rabbits, partridges and pheasants, all so realistically fashioned that it seemed as if they might leap off the tray. But what delighted the audience the most was the fountain of wine spraying in a sparkling arc from the castle’s highest tower.

The squires, of whom her brother Therri was one, paraded their wondrous burden up and down the crowded aisles, garnering much praise and applause from the diners before they carried it to the dais and presented it to the guests-of-honor.

Joyce DiPastena dreamed of green medieval forests while growing up in the dusty copper mining town of Kearny, Arizona. She filled her medieval hunger by reading the books of Thomas B. Costain, and later by attending the University of Arizona where she graduated with a degree in history, specializing in the Middle Ages. The university was also where she completed her first full-length novel…set, of course, in medieval England. Later, her fascination with King Henry II of England led her to expand her research horizons to the far reaches of his “Angevin Empire” in France, which became the setting of her first published novel, Loyalty’s Web (a 2007 Whitney Award Finalist).

Joyce is a multi-published, multi-award winning author who specializes in sweet medieval romances heavily spiced with mystery and adventure. She lives with her two cats, Clio and Glinka Rimsky-Korsokov, in Mesa, Arizona.

4 thoughts on “Whimsy at the Medieval Table”